Pastor Thomas Russell, a native of Chicago, Illinois, began his spiritual journey in 1983 at the First Pentecostal Church under Suffragan Bishop David Eddings. Through this ministry he was baptized in “Jesus’ Name” and filled with the Holy Spirit.  Pastor Russell currently serves the people of God at Grace Temple Church in Phoenix, Arizona where he, by God’s grace, has been “equipping the saints for spiritual warfare” for the past 20 years.

The mantle of this ministry was passed to Pastor Russell and his late wife, First Lady Bonnie Jean Revels Russell, by the late District Elder Alfred Revels, Sr.

In 1974, the Russell family moved to Phoenix, Arizona.  Pastor Russell graduated from McClintock High School in Tempe, AZ in 1985 and decided to serve his country by joining the Marine Corps.  It was while he was in the Marines that he felt the Lord leading him to serve the people of God as he was serving his country.

After receiving God’s call on his life, Pastor Russell has ministered in various capacities. He was called into ministry under Bishop Michael L. Shelby of God’s House Church located in Albuquerque, NM.  Pastor Russell later received orders to Okinawa, Japan and shortly afterwards started Pentecostal House of Praise.  In 1998, Pastor Russell integrated his church with Chaplin Brown located on base into the newly formed Camp Kinser Christian Service. Later that same year he took over Bibleway Apostolic Church, in Okinawa, for Bishop Jerelette Mickey.

Pastor Russell has three sons, Thomas, Jr. (TJ), Tyler, and Taylor born from the union with his late wife of 23 years.  He was blessed by God to marry First Lady Tahirih Erhabor Russell in 2013.  “The man who finds a wife finds a treasure, and he receives favor from the LORD.” Proverbs 18:22, NLT. Because of this union he is blessed with a son, Emanuel and a daughter, Ariel.

Pastor Russell holds a Bachelor of Arts degree in Business Management and a Masters in Education. He worked in the public school system in Arizona as an educator and coach. He is a retired Marine and disabled veteran.  Pastor Russell is licensed and ordained through the Pentecostal Assemblies of the World.  He currently serves as the Executive Secretary of the Mountain States Council, P.A.W. 15th Episcopal District where the Diocesan is the Honorable Bishop Gregory Newman. Ever wanting to be better equipped for service, he plans to pursue a Doctorate in Biblical Studies. 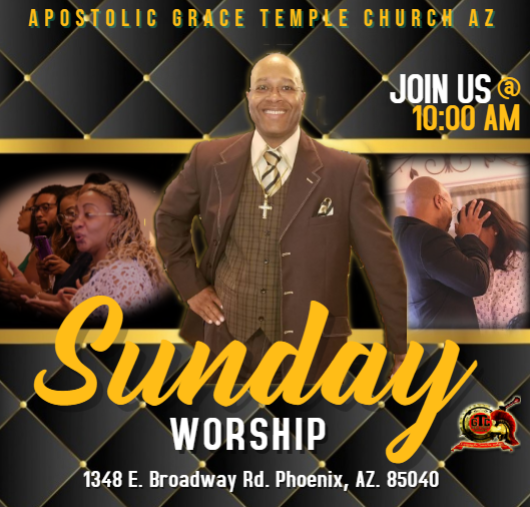